Sometimes having a Blackberry comes in handy – how else could I capture this perfect bathroom moment?  I do wonder what kind of ‘mysterious’ objects this restaurant has come across because obviously something prompted this sign: 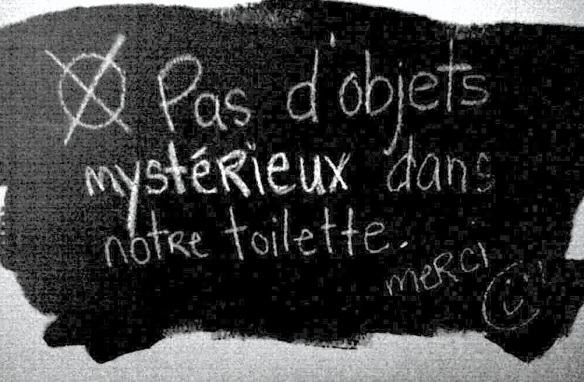 Translation: No mysterious objects in our toilet!

On an unrelated note, the bunnies have been visiting me frequently since the start of “Spring” (I use this term loosely as I don’t think “Spring” will ever make an appearance this year). I’ve got four rabbits running amuck on my property (there used to be two but mummy & daddy had two fur balls last year):  the two big ones are known as Mr. and Mrs. Mo, while the two minis are known as Mo and Mo. Yes, I have named all four of them ‘Mo,’ as I cannot tell them apart. That said, the mini Mos are smaller and quick as lightening –  I often see a brown blur out of the corner of my eye, a sure sign that one of the minis has sped by in a great big hurry. In any case, one of the minis is quite fond of me and dare I say, I think he has a crush on me. Yes, it’s true – bunny love is in the house! I often look up to find Mini Mo sitting outside my balcony, eyeballing me. He positions himself in such a way that allows him to observe me from one eyeball, and he will sit there until he notices that I’ve spotted him.  When Mo realized that he’s been caught in the act, off he goes like a bat out of hell. This is my bunny stalker – today though, he’s got his back to me and I suspect he might be upset that he didn’t see me all weekend:

Now, if only I could supersize him – he could put Stomping Tom in his place once and for all!

Yes, yes, I know it’s Saturday, but we’ve skipped the last two months of Thursdays with Tori,  so when I received her latest piece, I immediately had to post it. Why not wait till Thursday? Because it’s fabulous, that’s why! This piece is really just a celebration of Spring – quite cheerful, isn’t it?

What does everyone think?

If you’d like Tori to do some work for you, head on over to her site by clicking here.

No, this blog hasn’t been hijacked by a clone parading around as RAnnDomized – it’s really me, in the virtual flesh! I know it’s been a while since I last posted; truth be told, I have suffered a case of extreme procrastination, combined with a bout of zero inspiration (you can thank a certain blood sucker for that one). I plan to rectify this in the very near future because I am told that some of you miss my blog posts. What? Really? I don’t know what to say – I feel so loved 😀  Anyway, for those of you whose blogs I read regularly, please do not despair – I have a shit load of catching up to do and my sassy comments are headed your way. So when you see a sudden influx of comments from me…. don’t worry – I’m not stalking you. Now, I need to get working on some actual posts, so I’ll leave you with this pic of the day, courtesy of Beijing – I do not know what the hell is in this thing but I’m going to find out! It sort of reminds of a horizontal acorn/the egg in Harry Potter’s Goblet/that big blimp in The Golden Compass. What do we think? Should I see if this is on the market? 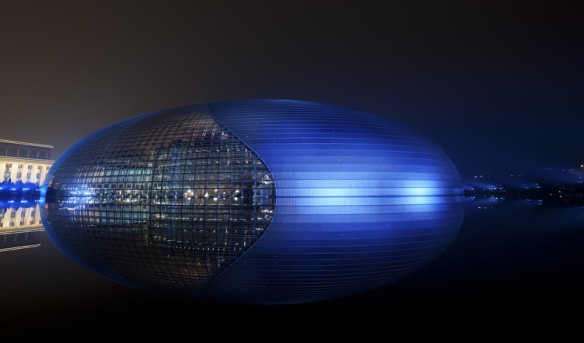 (OK, I found out what this place is but wanted to keep you in suspense for a minute or two. This is The National Center for the Performance Arts).

Like what you’ve been reading? Then go like us on Facebook! Come on guys – I’m four away from a measly 50 ‘likes’ – help me round it off, eh?

What a fabulous shot, not to mention an awesome piece of architecture! Apparently this is the most significant Taoist structure in China, and is known as The Temple of Heaven. What do you all think?

Like what you’ve been reading? Then go like us on Facebook! Come on guys – I’m four away from a measly 50 ‘likes’ – help me round it off, eh?

The notion of running away has been appealing to me more and more lately; no more job, schedule, trains, neighbors, bullshit. I’m bored with the everyday stuff and bored with the mundane and I need some excitement. Some spice. Anyone want to pack it up and run away with me? This is where we’re going…. Ibiza!

See that little round thing at the end of the dock? That’s my dedicated yoga spot – what a perfect place to salute the sun each morning and reflect on how nice life is, as a runaway yogini. For those of you who are interested, I’ll meet you at the airport in an hour – I’ll be the one holding the cocktail.

As E.E Cummings once wrote:

For whatever we lose (like a You or a Me)
It’s always ourselves we find in the sea.

Like what you’ve been reading? Then go like us on Facebook! Come on guys – I’m six away from a measly 50 ‘likes’ – help me round it off, eh?