Last Wednesday I flew out to New York for work. I chose an 8pm flight because I wanted to avoid traffic and other assorted bullshit. Thankfully, my drive to the airport was uneventful and there was no shit in sight – that is, until I got to the airport. I drove in exactly the same way I always do and immediately hopped into the lane on the far left, knowing that this would lead me right into the Proxi-Parc. That’s where I hit a wall. Literally. Well, I didn’t actually hit a wall with Mo (my car, for those of you who are unfamiliar) – but what I did ‘hit’ was a big slab of cement that prevented me (and anyone else) from accessing the goddamn Proxi-Parc. I had no choice but to drive past the Proxi-Parc, into the Arrivals area (fun!), drive my ass around the entire airport and then right on OUT of it into traffic. Twice! Now the third time (yes, you read correctly), I was visibly agitated and cursing like a motherfucker. I mean seriously – how fucking hard is it to post road signs that clearly indicate how one accesses the fucking parking lot? Am I supposed to guess? You’re doing construction – doesn’t it make sense to put up big-ass signs directing travelers on how to access certain parts of the airport?  Anyway, I was livid.

On my third attempt, I once again found myself driving past the Proxi-Parc entrance that I had no access to (all the while, I kept seeing other cars driving in without a problem). At this point I seriously considered going home – I mean, how much does one girl have to take just to access a fucking parking lot? As I drove through Arrivals (again), I was on my way back out of the airport (again) when I saw a sign to my left that read ‘Stationnement Aerogare’ or some shit like that. I had no idea if this was the way into the magical shitdom of Pierre Elliot Trudeau Airport but goddamn, I was going in. And thus, I was finally able to access the Proxi-Parc. It only took 40 minutes and three times around the damn place but whose counting?  So I drove into the level parking to find that it was full and there was nary a parking spot in sight. At this point I was ready to lose my shit all over the place. After driving from one level to the next, I finally found a spot – thank you fellow traveler for leaving when you did.  Off to check in. Finally.

I checked in using a kiosk and have no shituation to report there. Going through Customs was another story. I think we were about 50-60 people waiting to go through. There were two Customs officers on duty. And they were slow as shit. And it was like a sauna in the bloody waiting area. It took me 40 minutes just to go through Customs. By the time I joined my colleagues at the gate, they were sure I’d bailed on the business trip. I won’t lie – I came pretty close to going home! The flight to NY was uneventful, but we had to wait on the tarmac for a half hour before we could get off a plane. I swear, last Wednesday my patience was being tested in a major way. When we finally got off the plan into La Ghetto, we of course had to wait for a cab, and it was raining. Needless to say that I was very, very glad to get to the hotel.  After dumping our crap, we went for a bite to eat then headed back to the hotel for some much needed sleep.

Except I couldn’t turn off the lights in my room <disgruntled sigh>. After trying to switch off the hanging lights with no success, and being unable to turn off the table light, I was ready to pull the plugs out of both but of course, I couldn’t access the outlets. I had to call the front desk, who then sent up an engineer to turn off my lights. I also couldn’t figure out how to use the stupid handheld shower thingy until my colleague told me on the flight back. We’ll call it fatigue and leave it at that.

I arrived home Friday night, looking forward to my bed and my shower (with pressure and you know, heat). The next day, I took a road trip to Vermont. Here are some pics of NY – pics of VT to come on Tuesday! 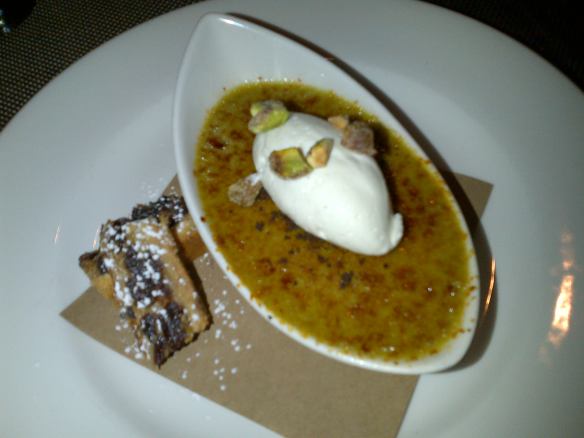 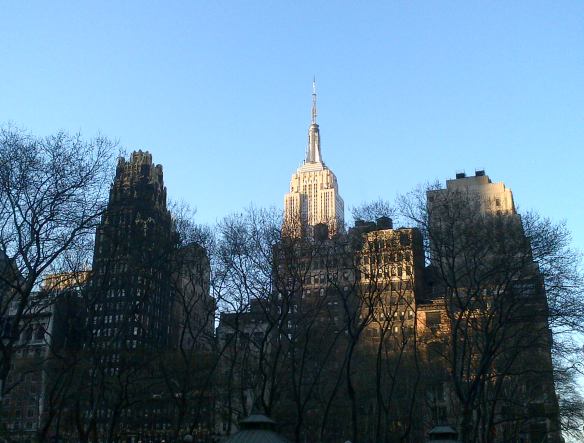 It’s high time we get back to the music people! So let’s kick today off with the newest edition of Mixed Tape.

When this post goes up, I’ll be sitting in our NYC office learning the ins and outs of my new job (and probably not rocking out to this tune). Who can speak New Yawk better than these guys?

(Umm, did you really think I was going to post Jay-Z’s Empire State of Mind on this here blog? C’mon now people!)

What did you wake up to this morning?

I’m a few days late in posting this, but truth be told, I forgot all about this until I started going through my portfolio earlier this week. After re-reading it, I think it’s worth sharing with my readers. I wrote this shortly after 9/11; I haven’t edited or changed this in any way, as it accurately expresses my sentiments based on the story that was shared with me at that time.

So, my friend S went to NYC for the first time ever. Never been before and was eager to check it out. She arrives with her younger sister and they feel a little afraid since they have no clue where they are. Understandable would you say? Sure. As I understand it, they dumped off their gear in a youth hostel and just began walking. If you’ve ever been to NYC, you’ll know that it’s much more fun (and less stressful) to walk – take in the sites, and not miss out on anything that would merely be a blur, should you opt for one of those life-threatening cab rides.

S and & company walk for hours – six, to be precise. She stops in front of a church. A memorial service is being held, and S assumes
this has something to do with the 9/11 tragedy. She was right. It was very sad she said, to see mourners, mingled with photographs of the deceased or missing. S keeps walking, and accidentally finds herself at Ground Zero. Shock and horror stop her cold, as she stares at the heap of rubble looming before her. A quick gathering of thoughts allows her to focus on the number of people lingering around the ‘scene’ where the incident occurred almost four months ago.

Tourists and spectators alike, cameras in hand, search for the “perfect spot” in which to take a photograph, and, when uncertain, they stop a brother in blue, to inquire “Is THIS the best spot officer?” S walks away in tears, emotionally aghast at this obvious lack of respect for the thousands who died on 9/11. Disgusting.

That such a tragedy occurred, that it not only affected ONE nation, but many – that this should be trivialized by tourists looking for a good shot is abhorent. It is sickening to think that human beings can be so uncaring and oblivious to this tragedy. While I can understand a person’s curiosity to see the site for themselves, I cannot understand what would posess anyone to stand before it, and take pictures, as though it were the Eiffel Tower. While the heap is massive, there is nothing GRAND about it. While it burned, there was nothing exciting in it. While the twin towers collapsed to the ground in billowing clouds of smoke, there was nothing dramatic about it. Tragic, yes. Hollywood drama, no.

And imagine, how that cop felt, when someone asked him if that was the best spot to take the picture. Imagine the thoughts that ran through his mind, as he stared at the person in front of him, when all he could see were the fading images of his brothers and sisters. Was it the best spot?